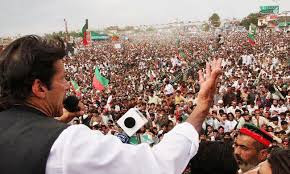 SWAT: Chiarman Pakistan Tehrik-e-Insaf (PTI), Imran Khan here on Sunday slammed Prime Minister Nawaz Sharif for promising development through construction of motorways and said that nations are made by providing improved educational and health facilities to masses.
Imran Khan addressed a huge rally in Swat and slammed Nawaz Sharif for promising motorways but no laying emphasis on true development.  "Nawaz Sharif said during his address a couple of days ago in Swat that he couldn't see the new Khyber Pakhtunkhwa from his helicopter. Mian sahib, you won't be able to see our new KP. Our new Khyber Pakhtunkhwa will be made in hospitals and schools," he said.
Further criticising Nawaz Sharif's policies, Imran said Pakistan did not require motorways but educational institutes. He also said that countries that do not spend on their children's education could never progress.
He also stated that much was still needed to be done in KP, especially with regard to hospitals. "We have strengthened institutions in Pakistan," said Imran. "Now we are in a position that we can make the hospitals of Khyber Pakhtunkhwa exemplary for the rest to follow."
Imran also said that by the year's end, a significant difference would be noted in hospitals across KP. He lashed out at Nawaz Sharif and placed blame on him for damaging the country's institutions.
"You have been taking turns since 30 years, what have you done to improve hospitals? Mian sahab, you have destroyed the police and bureaucracy," he said. "This was our first term and we have improved KP's police significantly. Today in Pakistan, the least amount of corruption takes place in Khyber Pakhtunkhwa," he said.
Imran Khan further said that as many as two-hundred billion Pakistani rupees were lying abroad.
"That is why we have to hold accountable the elite and dacoits," he said. "We have to bring back these two hundred billion Pakistani rupees that are abroad. This amount can be used to repay our loans, which are currently being paid through your taxes," he said.
Nawaz Sharif will have to answer to the nation for the Panama leaks controversy. We are with the joint opposition but if the need arises, will stand against Nawaz Sharif alone, he said.
"Mian sahib, if you allege that me and Jahangir Tarin are corrupt, then why don't you arrest us?" he demanded. "If our government comes, we will not allege that you are corrupt. We will throw you in jails," he said.