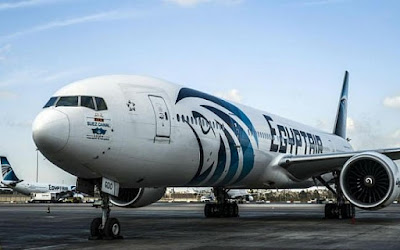 CAIRO: Flight data from EgyptAir Flight MS804 showed smoke alerts went off inside the cabin before the plane, with 66 people on board, plunged in the Mediterranean, according to reports revealed Saturday.


Signals from the Aircraft Communications Addressing and Reporting System (ACARS) showed smoke was detected in the toilet and the aircraft’s electrics before the plane crashed, according to the Aviation Herald website, which tracks incidents in the aviation industry.
While the Aviation Herald site said the information came from three independent channels, the report was not officially confirmed.
Reports of the smoke alerts came as search teams continued to scour the area in the Mediterranean where EgyptAir Flight MS804 is believed to have crashed early Thursday.
Debris from the plane -- including human remains, wreckage and personal belongings of the passengers – has been found around 190 miles (306 kilometres) north of the Egyptian city of Alexandria, according to Egyptian authorities.
However the plane’s flight data and cockpit voice recorders – also known as “the black box” -- have not yet been retrieved.
‘It’s not black box information’
While the flight data and cockpit voice recorders provide the best clues to the cause of a crash, the ACARS is merely a data link for sending messages between planes and ground facilities.
Experts have warned that the ACARS information has not been verified as yet and that the system merely transmits short condition updates.
“It’s not black box information, it’s not verified at the moment,” said aviation expert David Gleave in an interview , noting that the smoke alerts “may be indicative of electrical problems on the airplane causing these messages to be triggered.”—Agencies..