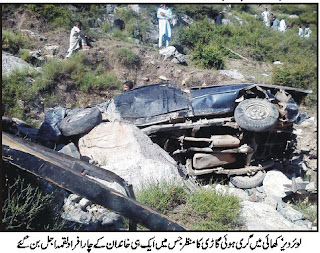 TIMERGARA:
At least four members of a family died in an accident in Timergara, Lower Dir on Thursday.

According to the police, a vehicle was carrying five passengers to Nambati. The driver lost control over the vehicle and could not negotiate a turn.

As a result, the vehicle then plunged into a gorge. The deceased were identified as Sargand Khan, Gul Shareef, Kamran and Hayat Pari while Muhammad Shireen was critically wounded.

The injured was shifted to the hospital while the remains of the deceased were handed over to their family members.

In a separate incident, two brothers were gunned down on Thursday following a land dispute in Lower Dir. Abdul Waheed, Asad and Abdul Ahad opened fire on two brothers, Noorul Ameen and Ejaz Khan, and escaped the site.