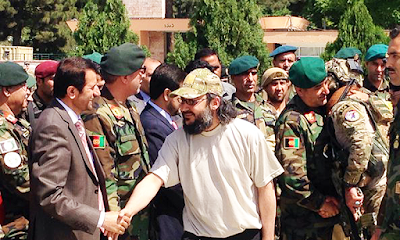 Son of ex-prime minister Yousuf Raza Gilani, Ali Haider Gilani, who was earlier recovered in a joint operation by Afghan-US forces in Afghanistan three years after being kidnapped, has arrived in Lahore on Wednesday afternoon.
Earlier on Wednesday, he was handed over to Pakistan officials in Kabul where he boarded the aircraft for Pakistan.
“I really appreciate Afghan-US forces who fought for my recovery,” Gilani, who was bearded, clad in a white T-shirt and sporting a camouflage baseball cap, said while talking to the media on his arrival.
Senior protocol officials of Foreign Office and brother of Ali Haider Gilani are in Kabul to bring Ali Haider home, said Foreign Office spokesperson Nafees Zakaria.
He said Ali Haider was handed over to Pakistan Ambassador to Afghanistan Syed Ibrar Hussain at the Ministry of Defence in Kabul, from where he went to Kabul airport to travel to Pakistan.
Kasim Gilani, the twin brother of Ali Haider, posted a picture on Twitter before departing for Kabul to bring his brother home. He captioned the image, “Taking off from Islamabad to bring back our hero.”
The information about the recovery of Ali Haider was conveyed by Afghan National Security Adviser Mohammad Hanif Atmar to Adviser on Foreign Affairs Sartaj Aziz in a telephonic conversation.