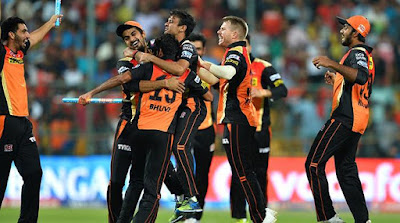 Chasing a challenging target of 209 runs, RCB batsmen starring skipper Virat Kohli and West Indian sensation Chris Gayle could only manage  for seven wickets to score 200 in the full 20 overs in the final.

Gayle made 76 off 38 and Kohli 54 in 35 deliveries to set the platform for an excitement finish to the tournament and that’s exactly what fans got. However, rest of the batting order couldn’t capitalize the brilliant start provided by the two classy openers and gave away the match to Sunrisers but only by 8 runs.

Cutting grabbed two wickets for 35 and BB Sran, Mustafizur Rahman and Bipul Sharma sahred one wicket each for Hyderabad.

Earlier, batting first after winning the toss, the Sunrisers batsmen took full advantage of a lovely batting track here scoring 208 runs for seven wickets. Warner made 69 off 38 balls with 8 fours and 3 sixes.

Dhawan 28 and Cutting remained unbeaten at 39 off just 15 balls with 3 fours and 4 sixes,Yuvraj Singh scored 38 runs.

Reuters adds: Bhuvneshwar Kumar, the highest wicket-taker in this year’s competition, conceded only 9 runs in the final over to dash Bangalore’s hopes of being third time lucky in the final of the Twenty20 competition.

Warner and Shikhar Dhawan (28) added 63 runs to give Hyderabad a decent start. They lost Moises Henriques cheaply but Warner joined up with Yuvraj Singh (38) to consolidate the innings.

Warner fell in the 14th over and Yuvraj in the 17th but Ben Cutting´s 15-ball blitz ensured they had enough on the board for their bowlers.

Cutting (39 not out) smacked fellow Australian Shane Watson for three sixes in the final over of the innings as Hyderabad plundered 52 runs off the last three overs to breach the 200-mark.

Watson endured a terrible outing with the ball, conceding 61 runs in his four wicketless overs.

The target was difficult but not beyond a Bangalore team boasting a top order that would send shivers down the spine of any team in the world.

Gayle looked ominous too as the West Indian southpaw smacked eight sixes in his two-run-a-ball blitz, dominating his 114-run opening partnership with Kohli.

The match seemed to be slipping away when Cutting (2-35), whose all-round display earned him the man-of-the-match award, dismissed Gayle to bring much-needed relief to Hyderabad.

Skipper Kohli’s form, however, meant Bangalore were still very much in the contest. Four of the seven centuries in this year’s IPL had come from Kohli’s bat and the tournament’s top scorer needed just 32 balls to race to his fifty.

Barinder Sran bowled the Indian test captain to bring Hyderabad back into the match and Bipul Sharma dismissed the talismanic AB de Villiers (5) cheaply to choke Bangalore who managed 200-7 in their 20 overs.
- May 29, 2016
Email ThisBlogThis!Share to TwitterShare to FacebookShare to Pinterest
Newer Post Older Post Home