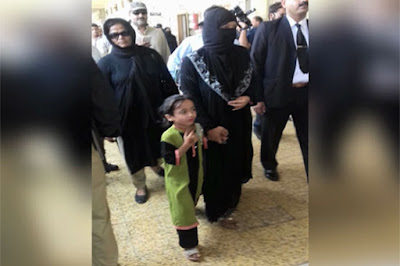 A sessions court on Thursday announced its decision regarding release of suspect Sonia in relation to Haleema Murder case.

The court rejected the police report requesting Sonia’s release and sent the suspect to prison on a five-day remand.Earlier, Investigation Officer Hameedullah Khan had said that evidence was not found against suspect Sonia.
The IO had submitted a report for the suspect’s release on the basis of criminal procedure code’s section 497.
Abdullah was brought to the Edhi Centre on May 31 by a man named Faizan who claimed to have found him at Sea View. A day late police recovered the body of a woman thought to be Abdullah’s mother Haleema from an apartment at Delhi Colony.
“If evidence found against Sonia, then she will be arrested again,” said Hameedullah Khan.
The main suspect in the case Rizwan also appeared in the court along with his wife Sonia.
The IO during the hearing presented the report pertaining to the investigation.
Also, an interim challan of the case was presented in the court and a request was submitted for the physical remand of Rizwan.
The IO said that more investigation has to be carried out from the main suspect, adding that mobile data is yet to be acquired.


It was on June 1 that police had found twenty-five-year-old Haleema’s body from an apartment which was discovered to have been handed over to her through Rizwan - a real estate agent.
- June 16, 2016
Email ThisBlogThis!Share to TwitterShare to FacebookShare to Pinterest
Newer Post Older Post Home