The special security plan for Eid in Mingora in Swat, officials canceled all holidays. 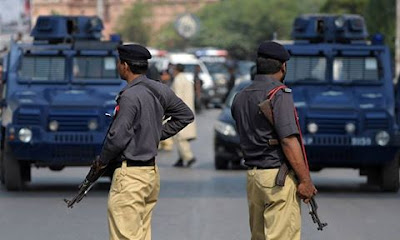 The special security plan for Eid in Mingora in Swat, officials canceled all holidays
According to police sources, SDP and Mingora City Habibullah Khan announced special security plan for Eid al-Fitr in Mingora to this effect in Mingora, Rahim Abad, SHOs Akhtar Ayub police stations bnr, aalmzyb Khan, Mujib Khan police officers in a meeting decided that was a feast cancel police leave to the special protection of tourists and local people on the occasion of Eid and duty of the clock which was tightened in the police will call any will at all times to deal with the incident, were also increased patrols at night, while heavy contingents of police have been deployed at all entry and exit points while deployed lady cop for women have been, and police with special police force, including elite forces Q .Commandoes levies and FC will also perform special duties, the SDP and Mingora Habibullah Khan told media that the Taliban the burden on Mingora Swat Upcoming visitors first enter Mingora because of the previously announced special plan for the city's security comes before the feast with him, and the most the shopping night due to the market, especially women shopping market in normally not present any untoward incident so heavy contingents of police have been deployed that are present on the clock duty, he directed the officers they do not refrain from any action to protect the lives and property of the people and crime exercise no leniency to criminals, he expressed satisfaction over the law and order in the city.
- July 02, 2016
Email ThisBlogThis!Share to TwitterShare to FacebookShare to Pinterest
Newer Post Older Post Home