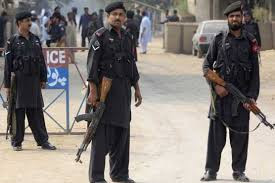 The Peshawar Counter Terrorism Department (CTD) here on Tuesday foiled a terror bid in Peshawar and arrested an alleged suicide bomber from Bacha Khan Road of the city.
According to CTD sources,  law enforcement personnel nabbed an alleged suicide bomber named Rehmanuddin from outside of the Radio Pakistan office in Peshawar.
The counter terrorism department has claimed that the suspect was trained to carry out a suicide attack in the country. It is being said that Rehmanuddin is an active operative of a banned group Jamaat-ul-Ahraar, a splinter faction of Tehreek-e-Taliban Pakistan (TTP).
The nabbed suspect belongs to Upper Dir district of Khyber Pakhtunkhwa.