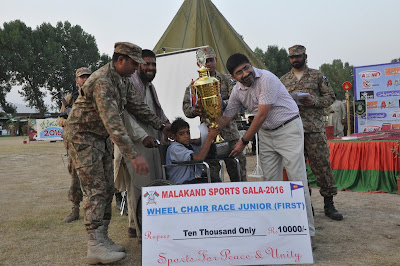 Army occupied Lahore Sports galaky closing ceremony was held with enthusiasm. Anaqadgurnmnt degree this ceremony was in college station. This colorful ceremony guest Security Brigade Commander Brigadier Mohammad Zafar Iqbal attended the occasion along with senior officers of the army and kysr number of children, men and women of the civil administration.
Will be offered various sports demonstrations at the event praised the fans. Practical sketches, singing patriotic songs and will be presented at the regional participants enjoyed listening to them. Displaying weapons by the army in the closing ceremony was also. Malakand sports teams and players to win in the Gala event guest winners in prizes were distributed wheel chair competitions kubrygydyyr Mohammad Zafar Iqbal from ten, gave ten thousand rupees reward. Speaking at the ceremony, Brigadier Mohammad Zafar Iqbal said that the recognition of nations is when he wakes up he fall, the division of people have looked hard you could see ukrus kajus do we say that you can count them up after the collapse of nations. This year tourists come in large numbers next year even more visitors will have the result of the sacrifices of the army and police and the evidence of the young dead and courage of the people of Malakand Division that we hold this Sports Festival to subdue the nefarious designs of terrorists. I congratulated the winners and those who lose hope that you will show good performance next year.
- September 05, 2016
Email ThisBlogThis!Share to TwitterShare to FacebookShare to Pinterest
Newer Post Older Post Home