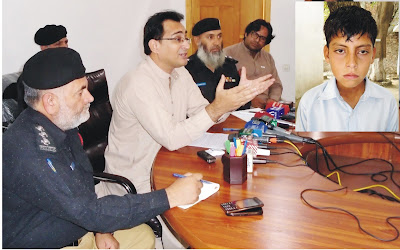 Krglh buy blade and sliced ​​off parts, police baby police before the media, accused child confession was, DPO Swat, Mohammad Salim Marwat said while addressing a press conference parryy a week ago Tehsil brykut area three-year-old has formed an investigative team to the gruesome murder of Hasan, the DSP Circle brykut said the king, DSP Kabal Dr John, investigation Officer aalmzyb and SHO galygy Fazal Rahim was also present , DP ausuat Mohammad Saleem Marwat said that after the investigation at every level have not got a clue DP ausuat Mohammad Saleem Marwat said that after investigation, at every level, we found no trace of the murder victimThe child's father did not have any claim and the case has become a challenge for them, which expressed doubt, he said DIG Malakand Division aktrhyat Khan and an investigation together formed team and are self-monitoring of the case, said police eventually ago to the baby made investigations concerning Hamza preliminary investigation and later elders and older brother Nadir baby spill secrets after six days he said the victim was a child with a kite Hasnain in the initial investigation if a child snatched the street kite from the wall where the suspect was taken into piles lured on to the kite HasnainSit the child pushed down, which he himself was, later accused Hamza cut the entire body, including the slaughter blydkryd by Hasan, accused baby Hamza was presented to the media remorse on her face there were no signs of fear and were openly bought strings of three years Hasnain murder confessed to krlyaaur said in Hasan's father, who was in the three hundred and five hundred, which is why the three-year-old Hasan was sad go grardya and the excuses Kite later blydlakr slaughtered and cut the aazabhy blade, this was an opportunity confessed to killing the suspect's older brother Nadir my brother in front of the media and the police against the accused regular registered a case and investigations are not yet completed the investigation started, the DP said rather than on an ongoing investigation in this regard.