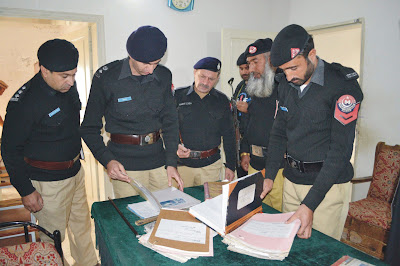 Station Building, examine malkanh and custody, the police have checked the record, police record checks were under investigation cases carefully reviewed
no negligence in the police department for the implicated officers patrolling strict action against officials kyjayygy
SWAT (press release) according to the district police officer Abbas Majeed Khan Marwat made a surprise visit to the police station cprya Ltd Tue, visit kyduran he visited the police station building, malkanh and custody, under investigation by checking records of police took a closer look at the cases, and issued instructions to the police station staff said they secretaryStation records shall take care, especially young men, in the station cleaning مسایئل مسائیل heard and make sure to resolve them dihani GDP Oh gosh more instructions to bring calm in the area, said it is the duty of police crimes and criminals from society and to put an end to all the police brought to an end the society into your وسائیل nasoruka. Jasfarshat will not be without any action, and in no place for criminals, nor will a criminal with discounts. Police Department officials involved in crimes, no place in the world for kernewale personnel negligence action کیجایئگی.District Police afsyr died Abbas Majeed Khan source of evil ua The True yfk AGA campaign Wednesday released