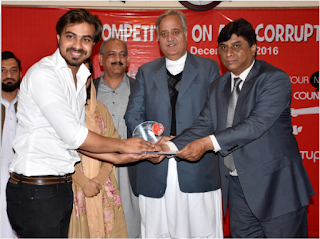 NAB is committed to the eradication of corruption. Comprehensive national anti-corruption strategy to eradicate corruption strategy has been set. Various governmental and non-governmental organizations, civil society, media and students expressed these views before returning to positive effects of the awareness campaign launched by students to fight corruption Bureau Director KP Mirza Mohammad Sultan bag today sykaz University during his speech to the students in Hayatabad He has been addressing the corruption case against him and raise awareness print to electronic media. The world can be a paradise to finish corruption in society and play a more active role for young students attain salvation hereafter evergreens jayygy.mlk Corruption Bureau Director said. Because students are the future architects. Young students have to play the role of all US troops to fight corruption.He added that with the NAB preferences to create awareness to curb corruption and corrupt elements, it is our priority to back wealth was consolidated. Because corruption is poison for society. And now is the time that we stood up against corruption and corrupt elements, denoting the hatred of them Sikaz University Vice Chancellor Prof. Dr. Riaz Khattak previously addressed by. On this occasion, Deputy Assistant Director and additional Director Liaqat Ali dairactr Muhammad Tariq NAB Salma Begum and university students, including students and faculty members participated in a large number.